In the wake of the SNP EU row, it's worth going back to the original texts and transcripts.

As every anorak now knows, Alex Salmond was interviewed in March by Andrew Neil about Scotland and EU membership.

Neil asked: Have you sought advice from your own Scottish law officers in this matter?

To which Salmond replied: We have, yes, in terms of the debate...

Bear in mind that law officers in this context has a very specific and limited meaning - it refers only to the Lord Advocate and his deputy, the Solicitor General.

After Nicola Sturgeon revealed there was no legal advice and the law officers hadn't been asked, Mr Salmond came to the chamber to explain what he'd meant in the Neil interview.

He said he had been referring to documents in more general terms, but stressed they were "underpinned" by legal advice from the law officers.

This is from the official report:

"As the full transcript of that interview makes very clear, I was talking about the issue of Scotland’s continued European Union membership in terms of general debate and in terms of many eminent legal opinions that were offered.

But as the 2011 Ministerial Code makes clear, it is actually rather unusual for the law officers to get involved in the fine print of government publications. Usually, it's the Scottish Government's Legal Directorate.
Moreover, the responsibility of the law officers is to advise on the law of Scotland, not EU law.

Here's what the code says:

Maybe the passages Salmond refers to were particularly important?

Your Scotland, Your Voice 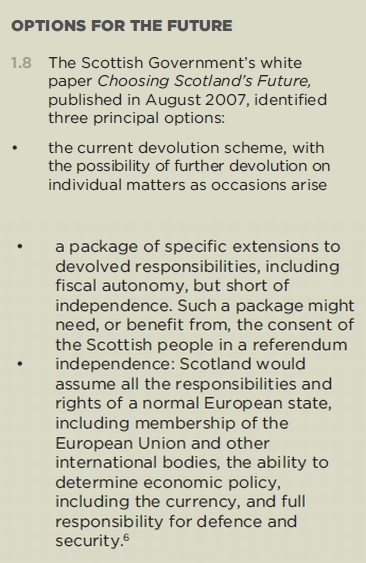 Your Scotland, Your Referendum

Do the law officers, who also have the Crown Office and Procurator Fiscal Service to oversee in their spare time, really get dragged into proofreading such documents?

They must be very diligent.

If not, Mr Salmond's gloss on events doesn't quite add up.