When is a deficit a surplus? When it's a "relative surplus" of course.

In the wake of the Edinburgh Agreement yesterday, there's been much #indyref chatter about Scotland's relative fiscal strength based on the annual GERS figures.
Some say there's a deficit, some say a surplus.
The answer is both, sort of.

Alex Salmond frequently quotes Scotland's 9.6% contribution to the UK tax take (including North Sea revenues), compared to the 9.3% of UK spending that goes to Scotland.

Sounds healthy, right?
But look again at the absolute figures.
That 9.6% of taxes raised £53.1 billion in 2010/11, according to GERS.
But the 9.3% of UK public expenditure going to Scotland was a far higher sum, £63.8bn.
In other words, Scotland had a deficit of £10.7bn last year, even accounting for a geographic share of North Sea revenue.

The 9.6% refers to UK income and the 9.3% to UK expenditure, and as we all know, the UK's income is smaller than its expenditure and as a result it has a large deficit.
Hence Salmond's careful use of the phrase "relative surplus".

Scotland isn't running an absolute surplus at all - it was £10.7bn in the red last year - it's just that the deficit isn't as bad as the UK's.
According to GERS, the Scottish deficit was 7.4% of GDP in 2010/11 compared to 9.2% of GDP for the UK.
And here it is in black and white on the Scottish Government's own website 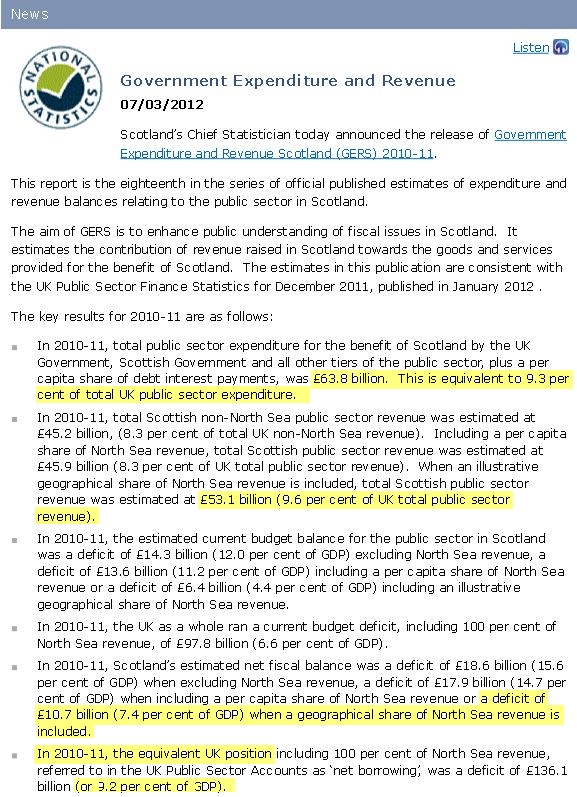