Some MPs are more equal than others


NICOLA Sturgeon has been talking a lot about "equality and fairness" recently.
It will be at the heart of the SNP's economic plan, for instance.
There is also the First Minister's ongoing effort to bring gender equality to the boardroom.
But there is a glaring example of inequality taking place under her nose which even some in her own party are now finding hard to bear.

Later this month, the SNP conference will be asked to vote on new rules for its MPs designed to bring extra discipline to the Westminster group.
This is essential for life in a hung parliament, when the whips need to track every single vote.
It's also vital to any power sharing deal with Labour.
If the SNP have, say, 40 MPs their allies need to know that means 40 votes, not 30 votes and some rebels and abstentions.

So all SNP MPs elected in May must "treat the position as a full-time commitment".
All MPs except one, that is.
Not for the first time, it seems different rules will apply to Alex Salmond.
If all goes to plan, on May 8 he will both an MP and an MSP, not to mention a newspaper columnist and author.
Besides being a presentational problem, it's also an arithmetical one.
As he'll have to be in Westminster far more, it leaves the SNP outnumbered at Holyrood for the first time since they won their majority in 2011.
And as last week's vote on the NHS super-database showed, things can get pretty squeaky in  such situations.


ALEX Salmond is under pressure to stand down as an MSP if elected to Westminster in light of new SNP rules and comments by senior members of the party.

The former First Minister, currently MSP for Aberdeenshire East, is standing in the LibDem-held seat of Gordon in May’s election.

If he wins he is expected to play a major role in the SNP group at Westminster, possibly as its leader or a key negotiator in power-sharing talks with Labour.

However a motion to the SNP’s conference later this month says incoming SNP MPs must “treat the position as a full-time commitment with an attendance and work rate commensurate with that status”, an obvious problem for Salmond if he has two jobs. 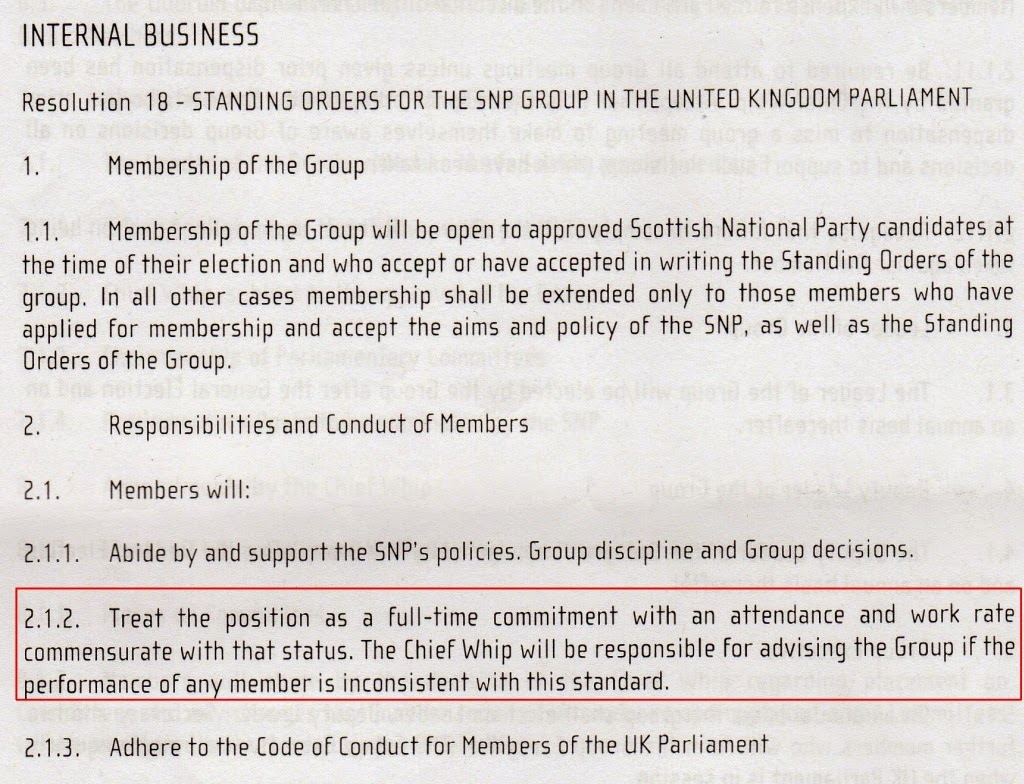 The rule has been proposed by Westminster leader Angus Robertson and MP Pete Wishart.

In a Commons debate last month on MPs with two jobs, Wishart also said being MP was “a full-time job”, adding: “No SNP Member has a second job, a directorship or a place on a company. Our responsibilities here are our sole concern and our only responsibility.”

Besides bringing Salmond into conflict with SNP rules, a second job would mean him missing votes in Holyrood and Westminster, as he could not vote in both parliaments at once.

Although Salmond has been both an MP and MSP before, it was during a Labour majority at Westminster, when his vote carried little weight in the parliamentary arithmetic.

After he was elected First Minister in 2007, he had one of the worst attendance records of any MP – voting in the Commons on just 16 days in his last three years there.

However with polls predicting a hung parliament, SNP votes would carry more weight, and Salmond would have to be in Westminster far more often.

The “pairing” system which lets government and opposition MPs miss votes in equal numbers also tends to break down in hung parliaments and is not used in votes of confidence.

Salmond’s need to be at Westminster could also cause the SNP trouble at Holyrood, as his absence would leave the party outnumbered for the first time since 2011 - by 64 votes to 63.

In addition, although Gordon partially overlaps Aberdeenshire East, representing both would mean Salmond’s potential workload would grow from 58,000 constituents to over 80,000.

One senior party insider said: “There would be a twin-track problem.
“We might not be able to rely on his [Salmond’s] vote in the Scottish Parliament, and we couldn’t rely on it at Westminster. Why doesn’t he just retire gracefully?”

Christine Jardine, LibDem candidate in Gordon, said: “The people of Gordon will take into account that the last time Alex Salmond was both an MP and MSP, his attendance record at Westminster was atrocious.
"It’s not possible to represent people in two places at once .
“It’s underlines that for him this is not about representing people, it’s about what he wants.”

A Scottish Labour spokesman added: “Once again, Mr Salmond finds himself in the enviable position of looking at two jobs, two salaries and two ways to fill his time.
“But his bluff has been called by his own party and he will have to make up his mind whether to be a full-time MP and part-time columnist, author and MSP, or do what people pay him for.”

A spokesperson for Salmond said: “Alex has always fulfilled any election period for which he has been voted and will continue to do so.
“We are not generally in a position of knife edge votes at Holyrood, and of course don't know what the position will be at Westminster, but any situation will be easily addressed.
"He is and will remain a full time parliamentarian if elected in Gordon in May, and the full time commitment refers to parliamentary duties.
"He would only benefit from one parliamentary salary, donating the other to support youth causes in North East Scotland.”
Posted by ScottishPol at 09:11