From today's Herald
EXCLUSIVE
Tom Gordon
Paul Hutcheon
TORY leadership hopeful Ruth Davidson is facing an inquiry after her campaign used the private email addresses of party members.
A Tory councillor has complained to the UK Information Commissioner’s Office (ICO) after the Glasgow MSP's team sent unsolicited material to his personal account.
The ICO may now examine whether Ms Davidson or her campaign used data from restricted party membership lists.
The Tory leadership candidates are not supposed to see the national membership details.
The Scottish and UK Conservative parties are registered with the ICO as "data controllers", and must keep their data secure.
However, The Herald understands that dozens of Tory party activists have received unsolicited "Campaign Update" emails from Ms Davidson.
Despite only being elected in May, the 32-year-old has emerged as the establishment's choice to replace Annabel Goldie.
Her supporters include Thatcher-era grandees such as Lord Forsyth and Lord Sanderson, and the party’s biggest Scottish donor, Sir Jack Harvie.
Ms Davidson is also understood to have the backing of Goldie, for whom she worked as an assistant, and Prime Minister David Cameron.
Under the Tory leadership rules, candidates are allowed to send a single "election communication" to the party’s 8500 members when ballot papers are posted out next month.
Ms Davidson’s campaign is sending regular emails to party members via a commercial marketing service called MailChimp.
One, sent September 12, just four days after her campaign launch, claimed there was already "a real groundswell of opinion" behind her.
Another, sent a week later, highlighted her national tour of constituencies, while a third sent last night said she had secured the 100 signatures needed to be a formal candidate.
"I promise I won’t let you down," she wrote. 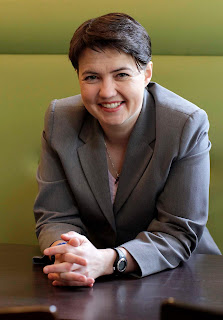 A friend of the unnamed councillor who lodged the ICO complaint said: "He was concerned because there has to be a level playing field for candidates.
"Where did Ruth’s campaign team get his email?
"He has never met Ruth."
Another Tory source said there were "widespread concerns" about her campaign.
A third said several activists had complained to the party HQ in Edinburgh and recived "incredibly defensive" responses.
Ms Davidson’s main rival for the leadership is Murdo Fraser who wants to abandon the "toxic" Scottish Conservative brand, and create a new centre-right party instead.
His idea, which is backed by almost half the 15 MSPs at Holyrood and a third of Tory councillors, is disliked by the party hierarchy.
The other contenders are West of Scotland list MSP Jackson Carlaw and Margaret Mitchell, a Central Scotland list MSP.
John Lamont MSP, Ms Davidson’s campaign manager, said: "We have collected email addresses from our activist base across Scotland. We also give people the chance to unsubscribe from the list."
Asked how the campaign team had obtained the councillor’s private email address, he said: "It must have been one of our activists in his area."
A spokesman for the Scottish Tories confirmed that a "query" had been received by Central Office about the issue of Davidson's team and personal email, adding: "The member was told to go to the relevant campaign team
Ken Macdonald, Assistant Commissioner for Scotland for the ICO, said: "All organisations that handle personal data, including political parties, have a legal obligation to keep it secure. It is also important to undertsand that most marketing emails require the consent of the recipient. we have received a complaint about this matter and will now make enquiries."
Posted by ScottishPol at 17:40