Abdelbaset Ali Mohmed al Megrahi, the only person yet convicted of the Lockerbie bombing, was on display at a pro-Gaddafi rally in Libya this week.

It prompted more political rows, many centring on the wisdom or otherwise of the medical advice which led to his release on compassionate grounds.

If he is still alive when the second anniversary of the release rolls round in three weeks' time, expect an intense revival of the arguments.

Predictably, this has resulted in Justice Secretary Kenny MacAskill trotting out the line about Megrahi dying from prostate cancer, and rushing to defend Dr Andrew Fraser of the Scottish Prison Service, who produced the report which led to Megrahi's release.

But Megrahi has been "dying" an awful long time.

What started out as a political debate seems to have evolved into a philosophical one. Yes, Megrahi is dying, but so are we all. At what point does dying overtake living? Discuss. 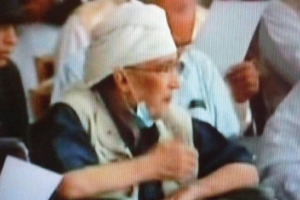 Second, and most importantly, it should be remembered just what Dr Fraser did.

A Scottish Government spokesman said yesterday: “Instead of criticising a senior health professional, Mr Hague should understand the medical advice to the Justice Secretary came from Dr Andrew Fraser of the Scottish Prison Service.

“Dr Fraser is a professional of impeccable integrity, and he concluded that his clinical assessment was that a three-month prognosis was a reasonable estimate.”

Nor had Dr Fraser ever written a compassionate release report before.

In all 60 or so previous cases since devolution, the local prison GP did that, because they were in the best position to examine and comment on the prisoner/patient.

MacAskill can justifiably praise Fraser to the skies for all sorts of things, no doubt, but when it came to compassionate release the good doc was wearing L-plates.

As I wrote last year:

Fraser never examined Megrahi, but consulted reports from four cancer and urology consultants, none of whom was willing to give a prognosis, and the GP at Greenock jail, who said Megrahi’s condition had deteriorated.

The compassionate release appraisal was the first Fraser had made at the SPS.

Until Megrahi’s case, the procedure in around 60 previous cases had been for the primary medical officer – typically the prison GP – to prepare a report for the Governor and ministers.

Dr Fraser’s report was a novelty both for the system and for the doctor, yet it was the sole medical assessment used by MacAskill to authorise Megrahi’s release.

Dr Fraser is not an expert in cancer, but in public health and drug addiction.

It's no wonder that, in an extraordinary change of heart, my Sunday Herald colleague Iain Macwhirter today admits in The Herald that releasing Megrahi was an error.

The case for releasing those medical records is becoming stronger by the day.
Posted by ScottishPol at 14:54