ALEX Salmond is to use a private company to receive his outside earnings from publishing, potentially cutting his tax bill.


The former First Minister is the sole shareholder in a new firm, The Chronicles of Deer, it has emerged.

The company will be the vehicle for Salmond’s flourishing career a writer, which includes newspaper columns and his best-selling referendum diary The Dream Shall Never Die.

It already holds the copyright on The Dream Shall Never Die.

The arrangement, which is not unusual for authors, could potentially reduce Salmond’s tax liabilities.

Instead of being subject to higher rate income tax of 40% or 45%, money going to a company can be subject to corporation tax at just 20%.

Money can then be withdrawn gradually as salary and dividends, reducing income tax and national insurance.

Salmond's outside earnings are expected to run into tens of thousands of pounds.

One of the two directors of Salmond's company is an accountant who specialises in “tax efficient investments”.

However, any benefits derived from using a company may be offset by operating costs, and authors are advised to take professional advice on the matter.

Despite Salmond starting his newspaper columns in February and his book coming out in March, the firm has yet to receive any money, raising questions at Holyrood about whether Salmond has arranged his affairs to avoid publicity before the general election.

Sources close to Salmond, who is standing in Gordon on May 7, deny this.

Scottish LibDem leader Willie Rennie said: “Why is Alex Salmond being so coy?

"Surely it would be best to simply declare what he has earned from his book sales and newspaper columns now? What has he got to hide?”

Salmond, who is also MSP for Aberdeenshire East, declared the new arrangement in his Scottish Parliament register of interests earlier this month - it was published on Friday.

It states: “From 2 March 2015 I have owned an ordinary shareholding worth £1 in Chronicles of Deer, a company for publishing books and writings.

"As at the end of financial year 2014/15 (6 April 2015) no monies have been paid into the Chronicles of Deer company account from any source and it has a zero balance.”

The Chronicles of Deer was incorporated as a private unlimited company on February 13.

Its directors are solicitor Tasmina Ahmed-Sheikh and accountant John Cairns.

Ahmed-Sheikh, the SNP’s candidate in Ochil & South Perthshire, is Salmond’s lawyer, while Cairns is Salmond’s accountant.

Salmond thanks them both in the acknowledgements of The Dream Shall Never Die.

Because the new company is unlimited rather than limited - meaning Salmond has unlimited liability for any debts - it is not required to file annual accounts at Companies House. 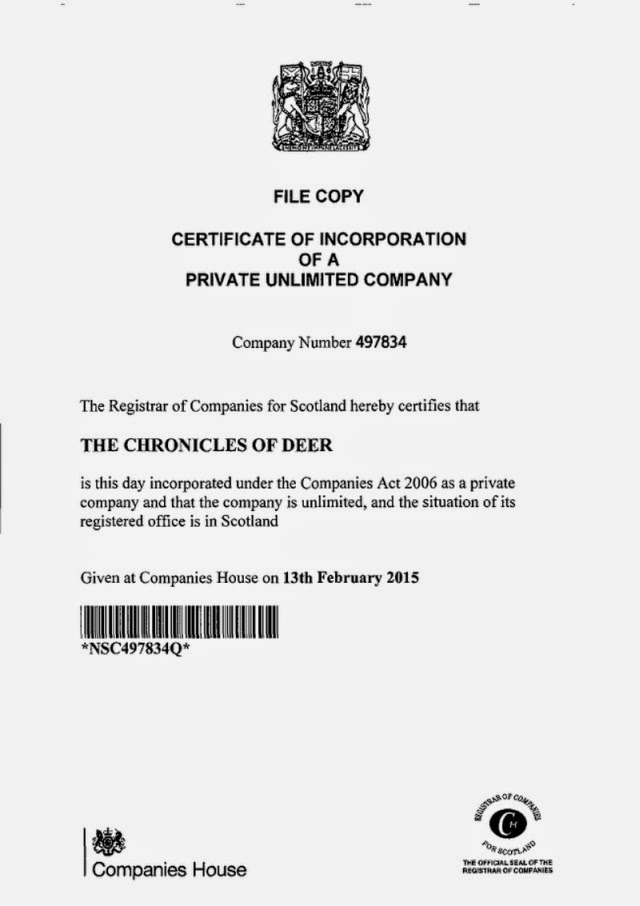 However Salmond has told the parliament he will voluntarily update his register of interests to declare all income as it arrives.

Cairns is a partner at chartered accountants French Duncan.

According to his profile on the firm’s website, he specialises in "advising owner-managed businesses and their owners on a wide range of tax matters, including: acquisitions and sales; reorganisations; share valuations; succession planning; shares schemes; tax efficient investments and inheritance tax planning".

The name of the company is a play on The Book of Deer, the first book to use both Scots and Irish Gaelic, which was produced in the tenth century by the monks of Deer Abbey near Salmond’s home in the Aberdeenshire village of Strichen.

Salmond’s spokesman said: “Mr Salmond has updated his entry in the register of interests according to the rules. The entry notes that as at the end of the financial year 2014/15, the company account had a zero balance with no moneys received, either from book sales or journalism.

“It is common practice, indeed the norm, for writers to establish companies to separate earnings from journalism and books from other income and the fact that the company is unlimited merely reflects that it carries no risk of default and that Mr Salmond as the 100% shareholder is willing to meet all company obligations in all circumstances.

“Clearly given Mr Salmond’s willingness, in the interests of transparency, to declare all company earnings within the relevant timescale, this goes far beyond the declarations that would be made in company accounts the following year making the claim of lack of disclosure simply absurd, indeed it is the complete reverse of the truth.”

The spokesman also pointed out that Salmond had made a large number of charitable donations from other income, including giving his First Minister’s monthly pension of £2598 to the Mary Salmond Trust for community and youth causes in the North East of Scotland, dividing a £12,500 speaking fee from Bank of America between four Scottish charities, and distributing  £39,750 raised from the auction of First Ministerial gifts.

It is understood The Chronicles of Deer may also make charitable donations.
Posted by ScottishPol at 07:00