There's yet another twist in the never-ending EU legal advice row today.
This blog has obtained a copy of the FoI appeal (now abandoned) which was lodged by ministers at the Court of Session.
To be fair, it never suggests that the advice exists.
However it does make the extraordinary claim that confirming its non-existence would cause the "exactly" same harm as revealing the content of any advice which did exist.
I think the legal term for that is 'total pants'.

MINISTERS told Scotland’s highest court it would cause “mischief” to reveal if they had legal advice on the status of an independent Scotland in Europe when none existed.

The claim appears in a confidential submission to the Court of Session which also suggests ministers would be “deprived of space to develop and formulate policy” if the full facts came out.

Alex Salmond’s government is already under fire after admitting last month that it had never had specific legal advice on Scotland in the EU, despite insisting for years that entry would be automatic. 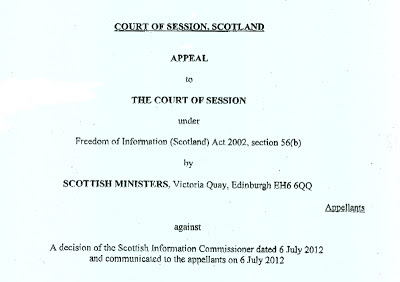 The same day as the admission, the SNP government abandoned a legal challenge on the issue.
The case concerned Labour MEP Catherine Stihler who asked last year to see any legal advice on EU entry under freedom of information (FoI).
The government refused, but in July Scotland’s Information Commissioner, Rosemary Agnew, ordered ministers to say if they held any advice, arguing there was a “strong public interest” in establishing if it existed, even if the contents remained private.
Claiming Agnew had “erred in law”, ministers launched an appeal at the Court of Session, and a full hearing was scheduled for late December.
It was this case which was dropped last month.
Because the case ended early, the background paperwork would ordinarily remain secret.
However this blog has obtained the appeal which ministers lodged against Agnew’s decision.
In her ruling, Agnew drew a clear distinction between the existence of advice and content.
She readily conceded that if there was advice it would be too sensitive to release under FoI, but said it was still in the public interest to know if it existed, given the important subject.
But in its appeal, the government argued there was no distinction in principle, claiming that merely disclosing whether advice existed would be just as damaging as disclosing its content.
It said: “The requirement to disclose the process being followed in policy formulation or the type of information being taken into account would result in exactly the same mischief as disclosure of the information itself.
“Either would cause the appellants [Scottish ministers] to be deprived of space to develop and formulate policy in the manner considered most conducive by them free from external pressure.”
Agnew’s side strongly denied this was the case.
The row over legal advice has dominated the recent independence debate, as the SNP insists Scotland would become an automatic EU member and avoid the euro, while others say membership would have to be negotiated, with adopting the euro a possibility.
Recent sabre-rattling by Spain, which wants to avoid wealthy Catalonia seceding, has also raised the prospect of other EU countries obstructing or delaying Scottish entry to deter separatist movements within their own borders.
Scottish LibDem leader Willie Rennie said: “The SNP has been exploiting the might of government to act in their own, narrow political interest.
“It was a cynical development that has undermined further trust in Alex Salmond’s government. It’s not the court’s responsibility to be concerned with what causes mischief for a political party.”
A Labour source added: “This case was never about avoiding mischief in government, it was about avoiding embarrassment for the First Minister.”
A Scottish Government spokeswoman said: “The case concerned whether decisions about public interest in the release of certain information are for the Scottish Government or the [FoI] Commissioner. By long-standing convention, successive Scottish and UK Governments have not disclosed the fact or content of legal advice except in exceptional circumstances.”
Posted by ScottishPol at 09:55