TORY leader Ruth Davidson cast herself as the face of "generational change" during the party's recent leadership race. But what kind of generation is currently coming through the Scots Tories?
Judging by some of the senior members of the Glasgow University Conservative Association (Hon Pres: R Davidson), it could be rather interesting.


This fascinating photo shows Ruth with a number of GUCA faces celebrating her election as a Glasgow list MSP in May. 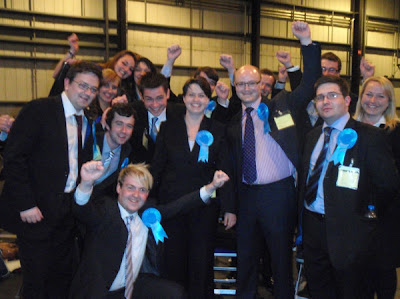 The blonde chap kneeling in front with arms aloft is Ross McFarlane, her election agent and GUCA president. She later sacked him as her Holyrood assistant after mobile phone footage emerged of him drunkenly burning an EU flag in a street at 2am while a companion made sectarian remarks about referee Hugh Dallas and the Pope.
Meanwhile, the poker-faced chap on the right of the photo with the square lapel badge is Stewart Green, the GUCA webmaster. He apologised after posting a number of dodgy Tweets about race, including one comparing an Asian festival to cats being strangled.
And finally (for now), the dark-haired guy with the blue shirt and blue tie immediately above McFarlane is Colin James Taylor, a former GUCA president, who now works for the Tory Press and Research Unit at Holyrood.
He features in a story in today's Sunday Herald after Tweeting lyrics from a song glorifying the UVF.
He has also apologised and been issued with a formal warning.
All in all, quite a crew.


NEW Scottish Tory leader Ruth Davidson has become embroiled in a sectarianism row after one of her party’s Holyrood staff posted song lyrics on Twitter glorifying Northern Irish terrorist group, the Ulster Volunteer Force.
Colin James Taylor, who is employed at the public’s expense in the Tory Press and Research Unit (PRU) at Holyrood, also referred to Celtic Football Club as “tims” on the popular blogging website.
A Rangers fan from Belfast, Taylor used the Twitter name “Ulsterexile” to post offensive remarks while studying at Glasgow University, where he was president of the student Conservative Association from 2009 to 2010.
Although most of his posts were about his studies, video games and football, he also said he had been “called a bigot before”.
On Saturday, February 19, this year he posted lines from a notorious song, Here Lies a Soldier, about a UVF member awaiting execution.
“Don’t bury me, in Erin’s Fenian vallies [sic]. Oh take me home, to Ulster let me rest ...” he wrote.

Although he did not tweet the rest of the verse, it runs: “And on my gravestone carve a simple message, Here lies a soldier of the UVF.”
On that weekend, the UVF was much in the news as Northern Ireland awaited publication of a police ombudsman report into one of the terrorist group’s worst atrocities, the bombing of McGurk’s Bar in Belfast in 1971, which killed 15 people and injured 16.
The report, published 48 hours after Taylor’s tweet, revealed that the Royal Ulster Constabulary wrongly blamed the IRA for the attack. The bombing was the worst during the Troubles until the Omagh bomb killed 29 people in 1998.
Taylor’s tweet also fell on the eve of the anniversary of the 1979 conviction of the notorious Shankhill Butchers, the ultra-Loyalist gang, many in the UVF, who tortured Catholic civilians and murdered at least 30 people.
On April 17, the day that Aberdeen and Celtic met in the Scottish Cup semi-final, Taylor posted on Twitter: “Hope the sheep absolutely hump the tims today.”

Tim is a term of anti-Catholic abuse. The anti-sectarian group Nil By Mouth said: “People have to realise that online bigotry is unacceptable.”
Taylor’s case has highlighted Davidson’s ties to Glasgow University Conservative Association.
According to GUCA’s website, she is the body’s honorary president. She attended its annual dinner on Friday. 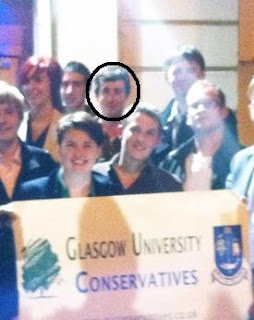 At the start of her campaign to lead the Scottish Tories, Davidson was forced to sack her Holyrood assistant Ross McFarlane after mobile phone footage emerged of him drunkenly setting fire to a European Union flag in a Glasgow street last year while a companion made sectarian remarks.
At the time, he was the GUCA president, as well as Davidson’s Holyrood election agent.
Last week, leading QC Paul McBride quit the Tories over the party’s hostility to an SNP bill aimed at tackling sectarianism in football.
After the Sunday Herald alerted the Tories about the matter, Taylor’s Twitter and Facebook accounts disappeared.
The Conservatives last night issued Taylor with a “formal warning”, but left him in post.
Labour MSP James Kelly said: “This is an insufficient response. In any other workplace a person who be out on their ear for this. There needs to be a proper investigation and disciplinary proceedings.”
A spokesman for the Scottish Tories said: “The comments which appeared on Colin Taylor’s Twitter account predate his employment with the Scottish Conservative MSP Group in the Scottish Parliament. His comments were immature and inappropriate.
“The allegations against Mr Taylor have been fully investigated and he has been issued with a formal warning.
“Mr Taylor deeply regrets the comments and he apologises for any offense he has caused.”
Posted by ScottishPol at 14:23